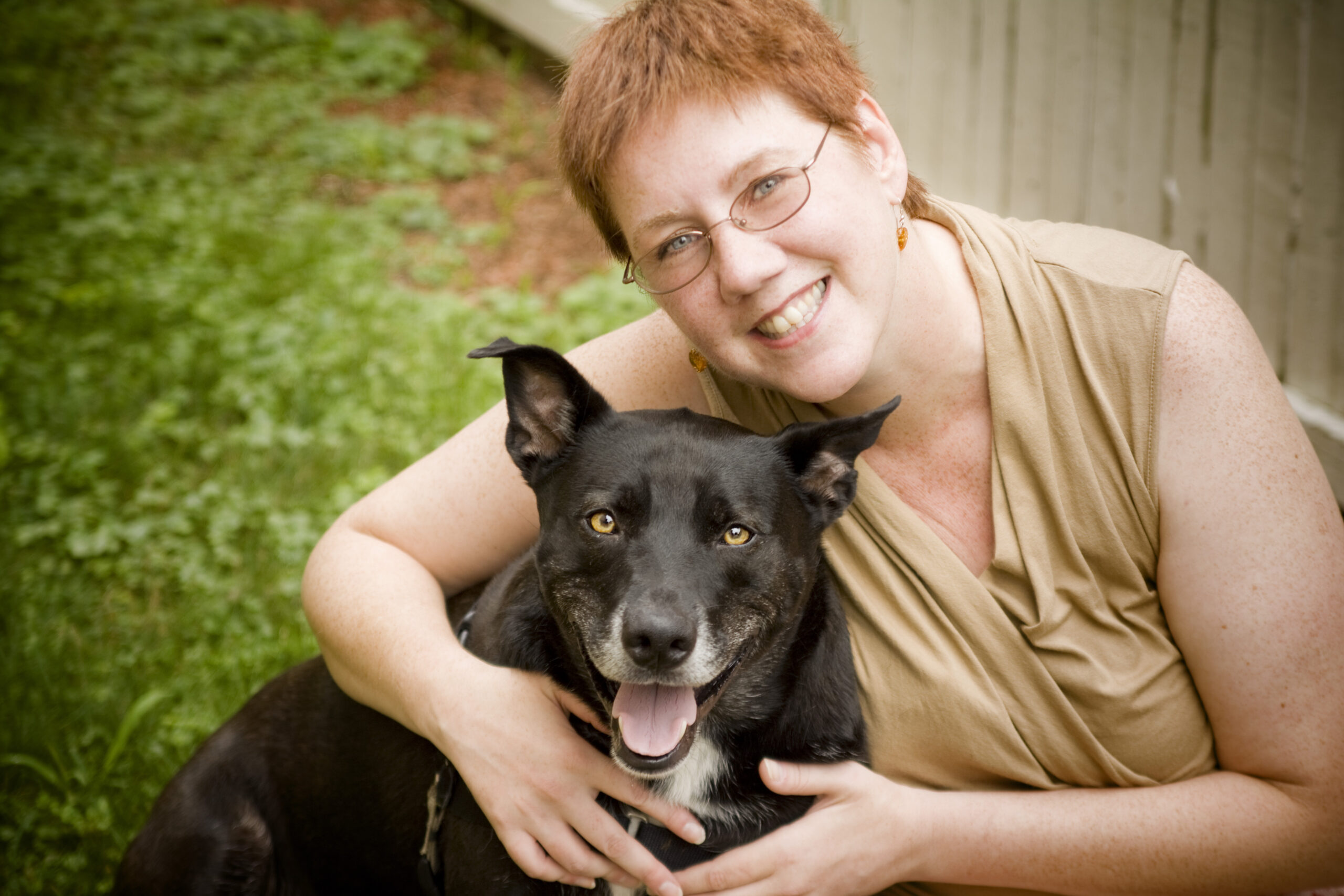 Ruth and her “supermutt” Jake

A bit about me…

Hi! I’m Ruth Hegarty and since 2010 when I adopted my Very Important Pet (VIP), Jake, (that’s us in the above picture) I’ve been on a journey to help him learn how to live in my world. Jake is a feral dog from Virginia and never lived with a human until I adopted him on October 20, 2010, at about eight months old.

I got into dog training almost by default as I desperately tried to find a way to get this wild animal I just brought into my home to behave. It was literally like I brought a fury banshee into my home. Jake tore around my house leaving a trail of destruction in his wake. He knocked me down to steal my food and bit me black and blue.

As I went from trainer to trainer and class to class being told to become the pack leader, administer “collar pops” try an e-collar and lots of other bad advice – one person even suggested I “mount” my dog to show him I was the alpha (and yes, she meant mount as in “hump”!). I was told Jake was dominant and needed a stern hand. I’m ashamed to say that, with the exception of the mounting idea, I tried it all. I jerked my poor dog around on a choke collar, electrocuted him with an e-collar, yelled at him and many other aggressive and really quite mean methods in an attempt to control him.

Then I had my “aha” moment, my epiphany, if you will. I loved Jake despite his inability to conform and he loved me. I could see he was trying. I had taken this poor sweet animal with severe anxiety who had never been socialized and had PTSD to boot from a dog attack and tried to force him to become a textbook dog. He couldn’t do that and neither could I. I felt like a monster the way I was treating him and worst of all it wasn’t even helping!

Jake and I had a long talk. We agreed to put the past behind us and move forward as partners rather than adversaries. I did my research and discovered there was another – a better – way. I discovered positive reinforcement training and I have never looked back. I took all the classes and trainings I could get my human paws on. I learned the impact not being socialized has on a dog, I learned the role of puppy mills in the increase in dog bites we see these days, I learned positive reinforcement training methods from the best trainers in the industry and I changed everything about how I think about and treat my dog, what I expect from him and how I get him to understand what I want. Jake and I have never been happier or more connected. He has overcome so much through positive reinforcement training and I have gained a new career in the process.

So, there you have it. I decided to train my dog with love and kindness and now I help other people to do the same. And don’t think Jake’s behavior problems were because he was a rescue, the most aggressive dog I ever met was a purebred dog. Yes, breeding accounts for some of your dog’s behavior (about 50%). The rest, not unlike with us humans, is comes from life experience. Purebred dogs get surrendered to shelters for “bad” behavior every day. I crusade for positive reinforcement training for ALL DOGS because I’ve seen first hand the difference it makes for both dog and owner. Using the latest in science based positive reinforcement training I customize creative training solutions for my clients that support their dog’s strengths and fit the family’s lifestyle so the behavior transformations are sustainable and dogs and their people get to live happily ever after.

And Jake, well, he’s our official CEO – Canine Executive Officer – and reminds me every day why I do this work and also why I love it!

Ruth Hegarty, M.S.Ed., has decades of experience teaching humans. With an M.S. in Education, Ruth is adept at teaching individuals and groups how to train and handle your dog in ways that you can easily “get.” As a certified Life Coach, Ruth knows how to ask all the right questions and reveal mindsets and beliefs that may be holding you back from successfully training your dog on your own. Finally, as a certified dog trainer Ruth has dedicated the past decade to learning all she can about the science of how dogs think, learn and communicate so that the work she does with you and your dog transforms your life together from frustrating to fun. Yes, dogs have evolved by our sides for thousands of years, but, although they are born primed to love us, they aren’t born knowing how to live in our world. That’s why training is so so important if you want to live happily ever after with your dog. Ruth is also certified in Dog Bite Safety Education, pet first aid/CPR and canine psychology. She is a sought after speaker (Boston Museum of Science and Harvard University to name a few), writer (Positively blog, A-DOG newsletter and her own popular blog among others), and educator (Suffolk University, Burbank School and many more).

Do you live with a dog you love but don’t love all of their habits? Have you tried training your dog on your own and just aren’t getting the results you hoped for? Do you want to stop being frustrated with your dog and start having all that fun you visualized when you first brought home your furry family member? WE WANT TO HELP!

Fill out the short form on this page and we’ll get back to you on how to begin transforming your life with your dog.